The protection and conservation of ospreys, and of other bird species as well, can be divided into two parts. Firstly, the Osprey Foundation aims to affect attitudes of Finnish citizens and decision-makers to a more osprey-friendly direction in every way possible. This work is executed via various writings, statements, radio and television shows, lectures, exhibitions, training events as well as one-to-one discussions. Simultaneously, practical operations are carried out in the field. The aim of practical work is to improve ospreys’ living conditions in Finland. A noticeable proportion of ospreys in our country are nesting on the artificial nest platforms by amateur ornithologists. The Finnish Osprey population is nowadays considered viable according to the Finnish classification system for endangered species - thanks to the active conservation work

The most important objectives of osprey conservation are:

Co-operators in the Osprey Conservation Work

One example of our co-operative projects is the nationwide nest sponsor campaign for which the Osprey Foundation has received support from various companies (see the Front Page for more information).

Other significant supporters of the foundation have been e.g. Vattenfall Ltd and Aina-Group Ltd, to mention a few.

The Osprey Foundation has signed an agreement with the global forestry company UPM. The company has practiced significant bird and nature conservation work in its forests as well as lead the way in encouraging other enterprises to practice their business in a nature-friendly, sustainable manner.

UPM is also a sponsor in the satellite tracking of osprey Pete’s migration. The Osprey Foundation conducts the tracking in co-operation with the Finnish Museum of Natural History. According to the agreement, UPM is also financing and sponsoring the nest camera project in the summer of 2018. The project allows Internet-visitors to observe osprey nesting and the birth and growth of newborn osprey chicks. 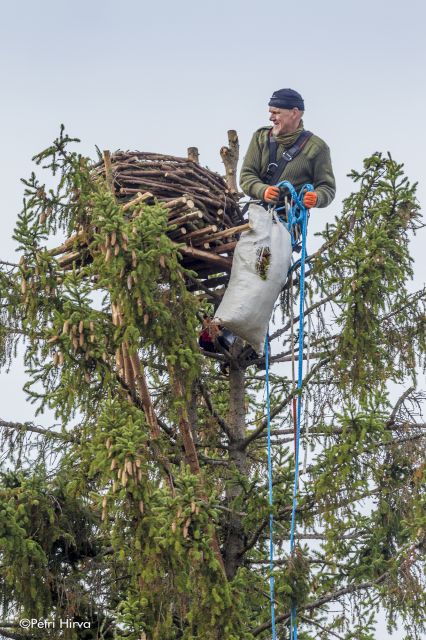